Congratulations to the Tyler County Commission on the grand opening of their new Tyler County Judicial Building. The McKinley team was honored to design the building, and attend the August 30th Ribbon-Cutting Ceremony and opening day festivities!

Present were representatives of the Governor’s Office, Delegate Kelly, former and Current County Commissioners, and members of the 2nd circuit judiciary, family and magistrate courts. 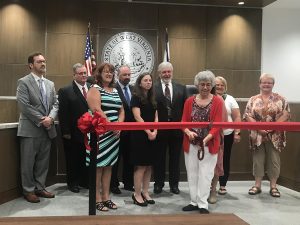 Replacing aging and insufficient facilities, the new brick and stone clad facility will primarily house the county magistrate and family courts in new courtrooms for each with space for public officers, staff, public transactions, and in-custody. McKinley worked with local members of the judicial system, commissioners, law enforcement and State Supreme Court in planning the Secure and modern spaces appointed for the dignified and efficient carriage of justice in 21st century proceedings.

McKinley thanks all who participated in the planning. Colaianni Construction the general contractor who effectively coordinated the work on a tight site, The skilled tradesmen who expertly executed McKinley’s designs of street arcade masonry archways (honoring the aesthetics of the nearby historic courthouse), intricate wood paneling and terrazzo finishes, and efficient MEP systems to name a few. The Town of Middlebourne accommodating the construction. And the Tyler County Commission who were active participants through the entire process an gave us the opportunity to design and administer the building of the fabulous new facility on Main Street, Middlebourne, WV.